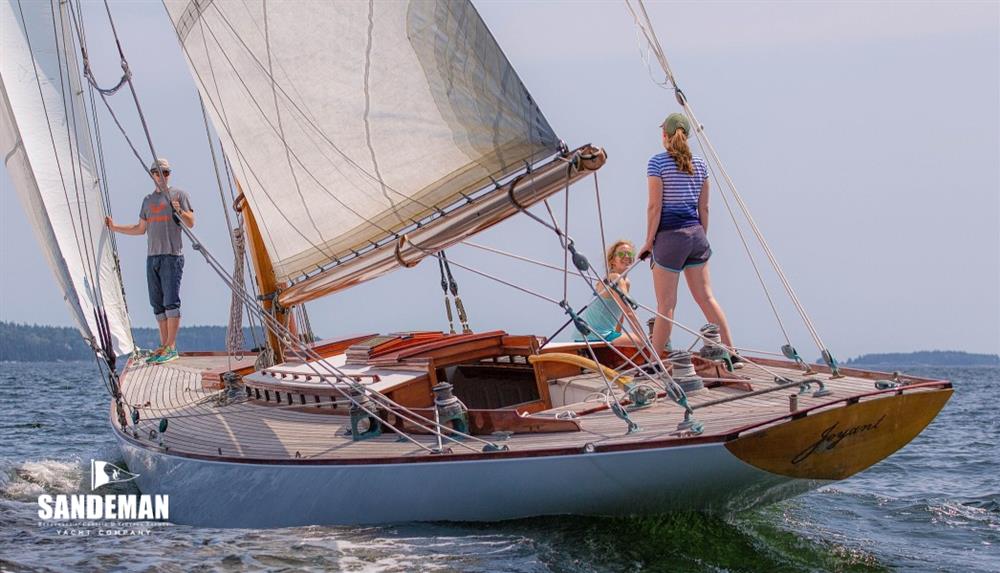 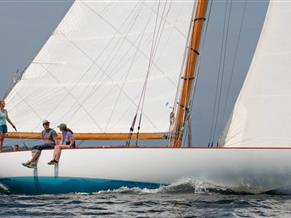 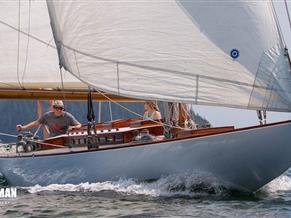 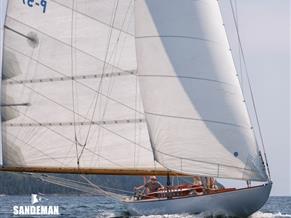 BROKER'S COMMENTS
The Herreshoff P-Class sloop JOYANT is one of classic yachting’s most remarkable stories of resurrection, with the provenance and a place in yachting and yacht design history truly deserving of such treatment. The vision and funds of the late Bob McNeil, and the skill of restoration master Jeffrey Rutherford have ensured that one of The Wizard of Bristol’s true masterpieces lives on to be able to race against her old adversaries more than a century after conception. Restored P-Class yachts have been gathering in the western Mediterranean in recent years; could JOYANT join them? But you don’t need to race JOYANT to get the best out of her. She takes you sailing, effortlessly and elegantly: take the tiller; tend two sheets; off you go; 58 feet of the purest form of sailing joy.


REBUILD AND RESTORATION
As found by Jeffrey Rutherford on Cape Cod, JOYANT was in challenging condition: a hulk, minus the lead keel which had been sold to pay for transport to there in the 1970s (see HISTORY section). So the first process was stabilisation, then transport to California. Copies of the original plans were procured from MIT, and the project began in late 2000.

A strategic decision was made to save every piece of wood that had some prospect of salvage. This included enough planking (largely the pitch pine) to plank about 30% of the hull, the deadwood, knees, sheer clamp and some deck beams. The only hardware that could be saved was the bronze strapping at the mast and the pin rail.

JOYANT was then carefully rebuilt in detail to the original plans, in the traditional Herreshoff inverted manner. Tapered steam bent frames were formed over stations and bolted to the floors. The keel, a piece of 3½ in by 14 in oak, was steamed and then fastened to the floors and shaped. The hull was double planked (as originally) with a clear yellow cedar inner layer and pitch pine outer layer. In between the two layers, epoxy was used. Finally, the planking was fastened to the frames with bronze screws.

One of the most important elements during construction was keeping in mind the details of the final finish. The desire was to have a very varnished interior: much attention was paid to having the inner layer of yellow cedar clean and carefully fitted plank to plank; one individual spent a month inside the hull when it was upside down, sanding and varnishing the interior.

The hull was carefully prepared for an Awlgrip paint job. The planked hull was then longboarded fair, covered with a layer of fibreglass cloth and microballoons and longboarded again until completely fair, during which process most of the bonding agents and microballons were sanded off. This has enabled JOYANT to not have to be painted each season yet maintain her pristine look.

After the hull was turned, it was married to the new lead ballast keel, faithfully following the original plans.

The deck is a sandwich between a first layer of spruce, v-grooved spruce on the interior side, followed by a 4 mm layer of marine plywood and finally a layer of ⅝ in teak. The deck was glued in place and blind fastened. Cabin sides and bright work are of Honduras mahogany, incorporating classic portholes forward and carefully reproduced skylights in the cabin top. All hatch parts and fittings are as per the original drawings.

Below decks, JOYANT was fully fitted out for inland cruising, as originally designed. The bulkheads were executed in the same form as the original panelled units except that the layers are sandwiched around a layer of 4 mm plywood for stability.

No engine was installed because the vessel did not have one when launched. The rig was altered slightly to take topsails. Hardware was copied from the plans and installed as per faithful reproduction. The only other exception from the original rig was the use of winches for safety.

Apart from the low maintenance topsides described above, properly wintered JOYANT is a relatively easy boat to maintain. At the beginning of each season two coats of varnish are applied on the brightwork and spars. A third is commonly applied in August. The interior is carefully wiped down in the beginning of June and that is the extent of the maintenance.

"On craft of, say the P class size... the owner or skipper is absolute master. While at the tiller he can form and carry out his plan of campaign without aid or interference, and he knows that upon his skill and generalship must depend the issue. This is a great source of satisfaction, for every man likes to feel that, win or lose, he is in full control of his ship and all credit and blame must go to him."


HISTORY
HERRESHOFF MANUFACTURING CO. #709
Born specifically to represent Greenwich, Connecticut’s Indian Harbor Yacht Club in the 1911 inter-club P-Class races for the partisanly competitive Manhasset Bay Challenge Cup, JOYANT was rather experimental at a time when designers were still investigating the possibilities of the relatively new Universal Rule; including, it seems, its originator Captain Nat Herreshoff. She was a very successful experiment, but the cause of some controversy in her first season: she was too fast, and her competitors didn't like it.

Designed and built for Indian Harbor Y.C. Commodore and co-founder of the then rapidly expanding Childs’ Restaurant chain, William H. Childs, JOYANT was heavier and longer than her competitors and therefore allowed under the rule to carry around 200 square feet more sail area. She proved fast in the typically light average summer winds of Long Island Sound and was expertly helmed by feared amateur (and amateur designer) Addison G. Hanan, a New York and Boston shoe manufacturer. JOYANT’s chief competitor, also by Herreshoff in 1911, was the slightly lighter and shorter CORINTHIAN, no less expertly helmed by none other than C. Sherman Hoyt representing a Seawanhaka Corinthian Yacht Club syndicate including yacht designer Clinton H. Crane.

JOYANT and CORINTHIAN came 1st and 2nd in the 2011 Manhasset Bay Challenge Cup races against boats representing fellow Long Island Sound clubs, American YC (Rye, NY), Larchmont YC (NY), and from north of Cape Cod, Boston YC, the Corinthian and Eastern YCs of Marblehead, and Portland YC. Despite both JOYANT and CORINTHIAN being subsequently disqualified from only that event in a measurement dispute as late as November 1911, JOYANT chalked up multiple successes in her first two seasons, also winning in 1911, Larchmont Race Weeks Series, Manhasset Bay YC Regatta and the Interstate Races at Marblehead, and in 1912 the Larchmont and Manhasset Bay regattas and the New York Yacht Club Cruise.

So successful was JOYANT that according to Captain Nat’s son L. Francis Herreshoff, under pressure from rival P-Class designer William Gardner, the rule was altered by its administrator, New York YC, to treat the sail area, displacement, and waterline ratios differently. The result is the version of the rule the J-Class yachts were eventually built to.

After brief ownership at Providence, RI from 1914 by soft drinks manufacturer H. Earle Kimball, from 1916 JOYANT remained a P-Class competitor with shipowner and New York and Indian Harbor YCs member Clifford D. Mallory, perhaps the ‘father’ of the North American Yacht Racing Union (now US Sailing). Her post-First World War owner is recorded as Thomas B. McGovern Jr., and by the early 1920s she had move to the Lakes.

During the 1930s-40s JOYANT had a sometimes fitted Scripps gasoline motor, replaced in the late 1950s by a 6 cylinder Chrysler Crown.

The later years of her first life were a downwards spiral to down-and-out in a cocoon of Cape Cod poison ivy. In c1975 she sank at her Portland, Maine mooring. The process of raising her by crane ended in disaster when a sling broke and she fell on one side. A constructive total loss, she lay in limbo until purchased by Cape Cod found-materials furniture makers Dick Kiusales & Steve Whittlesey for her timber. Then her depravations went even deeper when they realised how difficult her construction method made it to salvage the wood for re-use. She became completely abandoned to nature for over twenty years; until 2000 when word of her reached Californian yacht restorer Jeffrey Rutherford who was looking for a large but not too large gaff rigged yacht suitable for family sailing to restore for his client Bob McNeil.

JOYANT was trucked from Cape Cod to California in late November 2000 and the rebuild/ restoration process began, with sailing in Maine summer 2002 the target. It was achieved, and since then JOYANT has wowed both the McNeil family and her admirers at classic regattas in Maine and the Mediterranean, and been used for gentle and incredibly stylish family cruising.

[Thanks to the writings of journalist/ shipwright Nicholas Brown and the Herreshoff Museum website for assistance with elements of ownership history.]


NAVIGATION/ ELECTRONICS AND COMMUNICATIONS
Only portable (not included)