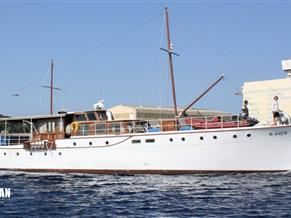 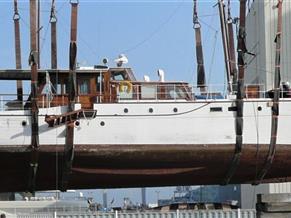 BROKER'S COMMENTS
If ever a yacht deserves rescue it is CONIDAW, rescuer herself of almost 1200 soldiers at Calais and Dunkirk in 1940, and a stylish masterpiece of John Bain motor yacht design with such personality and presence. And if provenance and looks aren't enough, she has an arrangement on deck and below that is as practical and comfortable for a family cruiser and race yacht mothership as it was eighty years ago. CONIDAW is available both as a project with her present highly skilled owners Classic Works of La Ciotat, France, or for outright purchase to be restored elsewhere. She offers one of, if not THE most exciting restoration prospects for a vintage motor yacht out there.


RESTORATION
CONIDAW requires a major and respectful structural, cosmetic, systems, and accommodation restoration. While not for the faint-hearted, the result will be one of the most fabulous classic motor yachts of this size. Detailed restoration specifications are available by request.


HISTORY
By the late 1930s, the Provident Clothing and Supply Company (now Provident Financial), founded at Bradford, Yorkshire in 1881 by Joshua Waddilove, had become Britain's biggest supplier of credit to the working classes, lending £18 million (something like £1.2 billion in present values) to some 2% of the UK population. This was good news for naval architect John Bain and his James A Silver yard on the Clyde.

One of Joshua's grandchildren, Ernest Waddilove, had purchased 2nd hand in 1937 the 1930-built 52ft Silver 'Brown Owl' type BENITA, then decided he needed something larger and a whole lot more individual. Apart from stipulating that his new yacht should carry the Brown Owl cruiser stern and flared bow, as far as we can see from the result, Waddilove seems to have left Bain a free hand. The result is arguably the finest pre-war example of Bain's and his yard's work, and at time of launch CONIDAW was both the the largest yacht they'd yet built, and the largest wood yacht built in Britain that year.

She was launched into the Gareloch at Rosneath on Monday 29th May 1939 by Waddilove's tartan-clad wife, Constance, and it was her candid portrait rather than the yacht's that featured in the next morning's issue of the Glasgow Daily Record. It may be a fair guess that the yacht's name CONIDAW is a play on her name that perhaps only the couple understood.

The mainstream press were wowed by CONIDAW's modernities, 'The Scotsman' commenting on her "inter-communicating telephones in the navigation bridge, deck saloon, and cabins", while 'Yachting World' mentioned the galley "... fitted out largely in stainless steel and with a big Esse anthracite cooker and Electrolux refrigerator."

'The Yachtsman' was particularly taken with CONIDAW and it's worth quoting more extensively:

"CONIDAW... is an example of wood construction at its best. She has an extraordinarily stout oak keel and heavy double oak frames spaced 24 in. between centres, with 3½ in. bent timbers between. Planking and decks are of teak, 1⅞ in. finished thickness, and the superstructure is all of teak. There is a lead keel, in one piece measuring 34 ft. in length and weighing 6.3 tons.

"The design... indicates a comfortable, stable and seaworthy hull, which, despite its substantial construction, should be be quite easily driven. The forward entry is fine considering the firmness of the bilges, and the run aft is clean and fair. Above water the bows are nicely flared, the sheer is gracious to the eye and the stern has that elegant double rounding which tells that the question of cost has not been regarded as being of first importance...

"The deck saloon is light and airy and at the same time snug and cosy with no space-cramping fixed settees and plenty of room to walk about. The dining saloon, too, has adequate floor-space, whilst the galley adjoining it is roomy enough to give the cook a chance to do his best.

"Headroom in the galley and forward is nowhere less than 8 ft. and in the rest of the accommodation there is a clear 6 ft. 6 in. under the beams. The finish and joinerwork is, in the main, walnut, but the deck saloon is finished in teak. All the doors are of the flush-panel type and the interior panelling is plain in the modern style, without any mouldings. Calor gas fires are fitted in all cabins and all floors are carpeted. The fittings include a Nevastane stainless steel sink in the galley, Electrolux refrigerator, Esse Fairy cooker, Esse hot-water system (both hot-fresh-water and hot-salt-water are available) Rhodes Somnus mattresses, baths and basins, in the new coloured ware, supplied by W.B. Morrison & Son, Reid mechanical windlass, Wasteney Smith stockless anchors, Kent windscreen wiper, and Cutlass rubber bearings.

"The propelling machinery consists of a pair of 102 hp 6-cylinder 6L3 Gardner diesels with electric starting, and the auxiliary plant is a Stuart Turner lighting set. The yacht will be able to carry 600 gallons of fresh water and 600 gallons of fuel oil. Two boats are carried, the larger being a 15 ft. 6 in. speed launch fitted with a small sedan cabin and the second a 12 ft. dinghy. A steadying sail plan is provided, the two hollow masts carrying a total sail area of 400 sq. ft. in a ketch rig."

The traditional base for Waddilove family yachting activities was out of the Royal Yorkshire Yacht Club at Bridlington on England's north east coast, but they also vacationed on the south coast at Bournemouth, and the nearby Royal Motor Yacht Club at Poole was her home mooring for the very brief period the Waddiloves would have been able to enjoy her before the outbreak of the Second World War.

During hostilities she became His Majesty's Yacht CONIDAW, initially working as an echo sounding patrol vessel armed with Lewis sub-machine guns from England's south east coast, and it is during this period that the rescue heroics of yacht and crew at Calais and Dunkirk during Operation Dynamo became legendary.

By May 1940 the allied situation was getting desperate. The Nazi blitzkrieg had reached the outskirts of Calais and only a handful of riflemen were left to defend the town. The battle was unwinnable and after a devastating pounding, the garrison was ready to leave. But if Calais fell there was nothing to stop the Nazis driving through and massacring the remnants of the French army and the British Expeditionary Force trapped on the beaches at Dunkirk. Winston Churchill said it was the toughest command he ever had to give but on 25th he issued the order personally: “Calais must be held at all costs”.

But how to get the signal to the beleaguered garrison in Calais? The soldiers had no working radios and the telephones were cut. The only possible solution was to send the written command by hand, so the vital message was entrusted to Royal Naval Reserve Lieutenant Reginald G. Snelgrove, who took HMY CONIDAW under continuous bombardment through the minefields into Calais to deliver the order to Brigadier Nicholson in person.

Next day the fighting was frantic, and one after the other the remaining Allied ships left the port. Finally CONIDAW was the only one left, staying on alone while the ferocious battle raged around her. Only as the first tanks of the 10th Panzer Regiment burst onto the quay itself did the last 165 soldiers jump on board and CONIDAW left Calais as fast as the twin Gardner 6L3s could drive her.

But just on clearing the mole disaster struck. She ran aground. The cramped soldiers must have felt they faced death in a few minutes. Nazi artillery would show no mercy for a stationary target with nowhere to hide. But then a fortuitous near miss by a bomb blasted the yacht off the sand with its shockwave and she scurried away to Dover. The scars of that encounter are still with her as her port engine still has a repaired cracked sump from that bomb blast.

Next morning CONIDAW joined the armada of little ships rescuing the remaining French and British soldiers off the Dunkirk beaches. Her shallow draft allowed her to go close inshore to take the starving, frightened and exhausted men out to waiting ferries in deeper water. Altogether she saved 900 in this way before returning battered but unbowed to Dover with another 80 soldiers on board.

After the excitement of those few days in May and a rest for emergency repairs at the Whitsable, Kent yard of Anderson, Rigden & Perkins, the rest of the war may have seemed a welcome anti-climax, although she was credited with shooting down a Heinkel bomber with machine gun fire. Some subsequent ports CONIDAW may have operated from are Scapa Flow in the Orkney islands, Plymouth, Dover and at Le Havre, France.

It is not yet clear if the Admiralty's wartime use of CONIDAW was by outright purchase or by donation/ requisition. If there was an option for the Waddiloves to have her back in 1945, it wasn't taken up, and her first post-war owner became former career soldier and Cambridge brewer of "Dales's Champion Beer", Lt Colonel Guy Frederick Dale, who also kept her at Poole, One of her summer destinations involved a return to northern France at fashionable Deauville.

Then in 1955 her registry moved to Belgium under the ownership of pioneering high-end Brussels department store À L'Innovation owner Émile Bernheim. Earlier in the 20th Century, together with his brother Edmond, Bernheim had developed the to this day imposing and luxurious Le Beauvallon Hotel (originally Le Golf Hotel) on the north shore of the Bay of Saint-Tropez. So it's fair to suppose that CONIDAW's arrival in the Mediterranean coincides with this period of ownership, which didn't last long.

From 1958 John L. Green, of Liechtenstein, was the new owner who gave her the name she would carry for the rest of her active life, THOMASINE. Curiously Green also owned the converted G.L. Watson-designed RNLI pulling and sailing lifeboat ETERNAL WAVE, which as JAMES STEVENS No.20 had been stationed in Ireland at Cobh (formerly Queenstown) and Fenit between 1901 and 1928. Both yachts and Green slipped out of Lloyd's Register of Yachts from 1967 and after that CONIDAW/ THOMASINE's ownership history until more recently is unclear.

But this remarkable yacht is still very much with us and deserves rescue so so much.

ACCESS TO AFT ACCOMMODATION FROM DECKHOUSE
- Down 6 x steps

CONIDAW's engines are exceptional. The two blocks are perfect mirror images of each other, rotating in opposite directions, so only the engraved name of Gardner shows that the one is not a reflection of the other. Production of the Gardner 6L3 gave way to the 6LB a couple of years after CONIDAW was launched, and that too eventually evolved into the Gardner 6LX, power plant of the famous scarlet painted double decker London bus. No doubt London Transport appreciated the staunch reliability of a marine engine converted for use on land: the very opposite of the Caterpillar, MTU or Volvo story today where engines are designed for the huge truck market and then adapted for use afloat. The subdued ticking of the Gardners’ slow revving cadence is a far cry from the high-pitched roar of today’s truck derived successors. Gardners are noted for their thrift as well as their reliability, so CONIDAW’s two tons of fuel oil provides an exceptional range for her easily driven hull. Furthermore there is excellent Gardner expertise and adequate spares available, so maintenance will not pose a problem.