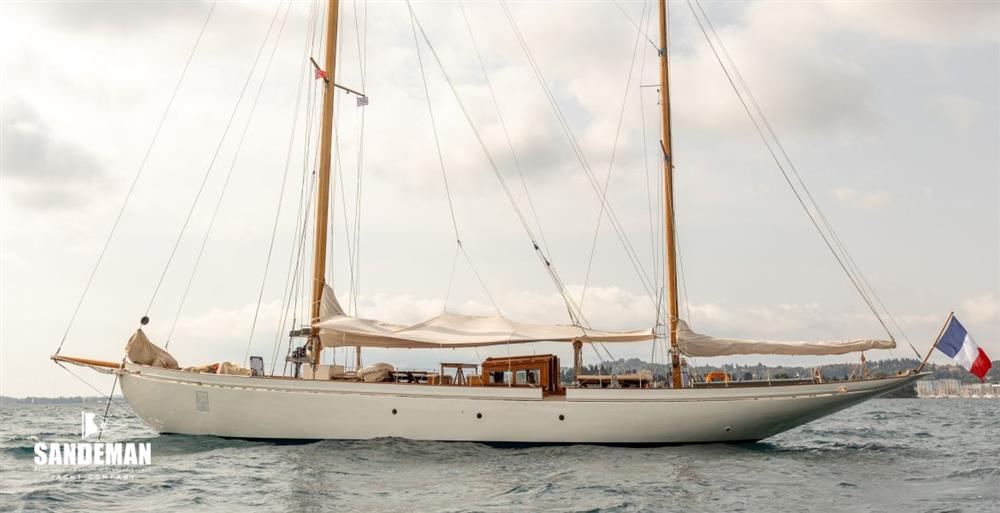 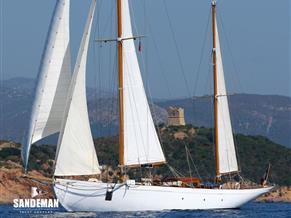 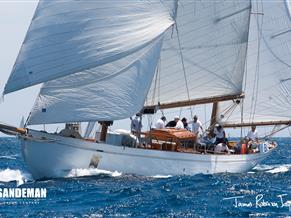 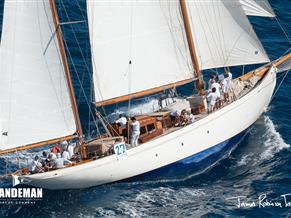 BROKER'S COMMENTS
MILENA is everything one wants a classic yacht to be. She has presence and wonderful provenance; is fine, yet solid, and spacious of her type; everything is in proportion, clean on deck and comfortably elegant below; fast and seakindly. In fact, MILENA represents everything Fred Shepherd did so very well, and has been all of that for her present owner - a love affair for almost fifty years. At 80 ft/ 24m on deck, MILENA sits in that sweet zone where a competent and fit couple could run without professional crew, or with minimum crew. And for regattas, her efficient bermudan ketch rig doesn’t require to be handled by a rugby team.


OWNER'S COMMENTS
I have owned MILENA for 47 years; she is a most wonderful yacht for cruising. I have spent many summers in Turkey and Greece on her. In the right hands she can also convert to a fast racing yacht. It is with great reluctance that I have decided to sell her.


HISTORY
MILENA was launched as PAMELA (the name can still be seen on her ship’s bell) into the Itchen River, Southampton, on Monday 7th May 1928 with her owner Sir Rhodes Cobb’s daughter Mrs Eileen Hollowey doing the honours. She was named after Cobbs’s grand-daughter, Pamela Game; daughter of his youngest daughter, Olive.

PAMELA had been built under Lloyd’s supervision and awarded their ✠18A1 Classification, then the highest available to a wood yacht. The original deck was of supremely durable Australian kauri pine, her sails were by Ratsey & Lapthorn, and auxiliary power was supplied by a four-cylinder, 30 hp Kelvin petrol motor. The local newspaper was mighty impressed by her reversing propeller, and that she was equipped with electric lighting throughout.

Royal London Yacht Club member and Esher, Surrey resident Rhodes H. Cobb was from of one of London’s leading Garlick Hill fur broker houses (Anning, Chadwick and Kiver Ltd) whose wealth allowed his son, John, to lead an adventurous life ticking off superlatives on land and water. At Bonneville Speedway in Utah, John Cobb would eventually gain the World Land Speed Record three times, in 1938, 1939 and 1947. But his 1952 attempt on the World Water Speed record on Loch Ness, Scotland, ended in tragedy when his jet powered boat CRUSADER broke up at over 300 km/h.

Since 1923, Rhodes Cobb had owned the Fred Shepherd-designed ketch DIADEM built in 1907, also by White’s. Their substantial yard was on the opposite bank of the River Itchen from Camper & Nicholsons (the site now known as “Shamrock Quay”) and would later became better known in living memory as Willments Shipyard. Cobb had obviously been happy with DIADEM; PAMELA was clearly a stretched sister ship.

But Cobb did not keep PAMELA for long. In 1930 she was sold to someone who one can’t avoid thinking must have been a friend of John Cobb: the equally daring speedster Lt. Commander Glen Kidston, R.N. Rtd. He’d been a fearless naval officer during the First World War, once torpedoed twice in different vessels on the same morning; was once known as Britain's most eligible bachelor; had been one of the late 1920s ‘Bentley Boys’ who successfully raced Bentley sports cars in Europe – including winning the Le Mans 24-hour race in 1930 with Woolf Barnato. Kidston was also a record breaking aviator; only one year into his ownership of PAMELA he lost his life in a crash while piloting a de Havilland Puss Moth in South Africa.

PAMELA then settled into longer ownership at Dun Laoghaire, Ireland, by highly successful Dublin building contractor John Good whose previous yacht had been the Fife 12-Metre LADY EDITH, now based at Istanbul’s Rahmi M. Koç Museum. Good became Vice Commodore of the Royal Alfred Yacht Club in 1935 and was a member of the Royal Irish Yacht Club. Ireland remained neutral during the second world war with organised yachting resuming in 1942. It is not yet clear if she remained in commission at Dun Laoghaire, or whether her next owner had purchased her just before the outbreak of the Second World War. In late 1930's Fred Shepherd brokerage adverts the unnamed vessel in the following description just has to be her:

In the 1946 Supplement to the 1939 edition of Lloyd's Register of Yachts, PAMELA’s new owner was recorded as Lord Glentanar, aka Thomas Coats of the J & P Coats thread making family, famous as serial yacht owners from the profits of one of the world's largest companies through the Victorian and Edwardian eras. Under Glentanar's ownership she was most probably mainly Firth of Clyde-based. In 1947 she was fitted with a new Coventry four-cylinder diesel engine.

By the mid-1950s PAMELA had relocated to the Western Mediterranean and a series of Italian ownerships began, one rumoured to be a countess:

In 1969 MILENA's ownership transferred to Antibes-based professional yacht skipper Barry Piggin who berthed her at San Remo. Her Lloyd's Class was again discontinued at owner's request in 1970.

Remarkably, her present owner purchased MILENA from Barry Piggin in 1974 and it's been a romance ever since. Over the past almost 50 years MILENA has cruised, chartered, taken part in occasional classic regattas - and, of course, enchanted all who have sailed with her.