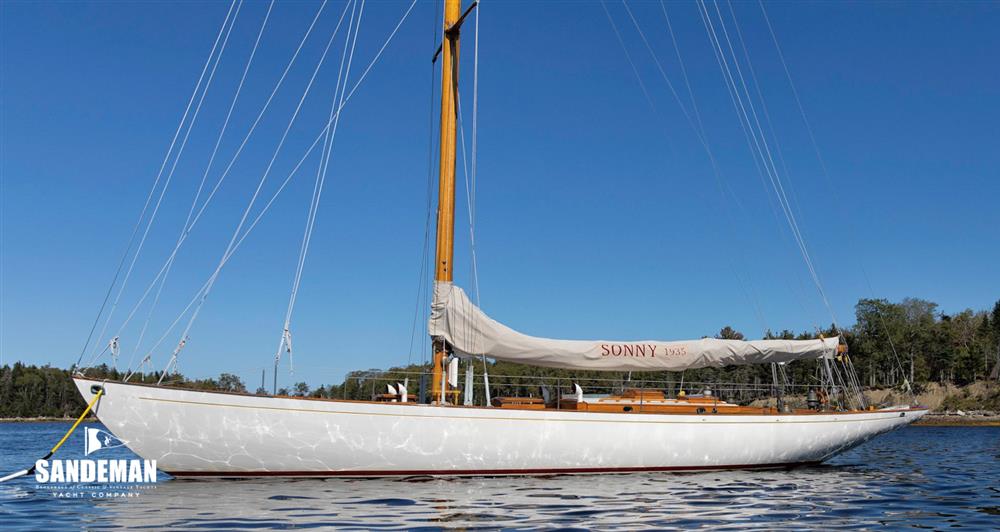 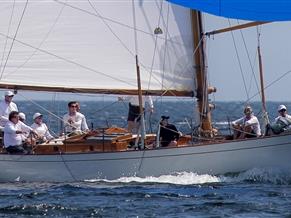 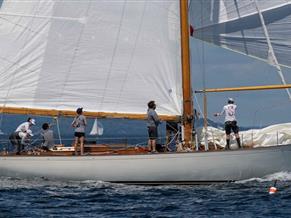 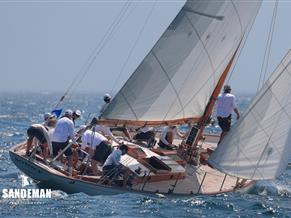 BROKER'S COMMENTS
One of the most sought-after books on the designs of Sparkman & Stephens is titled ‘The Best of the Best’. Undoubtedly, SONNY is one: a fabulous example from the heady 1930s, when the focused minds of two New Yorkers only in their 20s, Olin and Rod Stephens, rapidly evolved the fast, efficient, yet comfortable moderate displacement offshore sailing yacht to a point where it couldn’t be bettered. For the past 25 years this has been celebrated in revival and restoration, particularly of the handy-sized 50+ feet cousins of STORMY WEATHER. SONNY’s treatment, care and regatta success both sides of the Atlantic over 20 years has been the best of the best. That, and her story, abilities, and sheer good looks make SONNY such an enticing prospect.

"... a type that should gladden the hearts of those who go down to the sea in such small ships" - Uffa Fox

John G. Alden wasn’t jesting in his often-quoted statement on first sighting STORMY WEATHER on Henry B. Nevins’s City Island, New York slipway in 1934: “In my opinion, a better design would be impossible to achieve.”

Moving forward from lessons learned with the in some ways unlikely phenomenon that was DORADE, in combining ocean-going experience with intuition and science - eventually in tank testing - through the 1930s Olin and Rod Stephens rapidly developed the moderate displacement, keel attached rudder hull form to a point where it could barely be improved, starting most famously with STORMY WEATHER, and then her 50+ footer cousins, including EDLU, SANTANA, AVANTI, SONNY, ZEEAREND, VRYLING (now SKYLARK), ATALANTA, BLITZEN… and more (we’ve only reached 1937).

These post-STORMY WEATHER Sparkman & Stephens racer-cruiser designs were variations on the theme, their underbodies tweaked here are there depending on what they were intended to do, what rig they would carry, and where they would sail. The next big jump wouldn’t come for 30 years with the mid 60’s separation of rudder from keel.

The successes of DORADE (Design #7) and STORMY WEATHER (#27) and their offspring quickly brought commissions for more of the same to the still fledgling Manhattan design office, to such an extent that when Bronx real estate developer Albert D. Phelps came to commission SONNY less than a year after STORMY WEATHER’s launch, she would already be Design #94.

Phelps was replacing an earlier SONNY also built by Robert Jacobs, a pretty 49 ft Ford, Payne & Sweisguth-designed schooner; perhaps planning to improve his chances of success in the then ever increasing number of US offshore races.

In 1937 and 1938 SONNY again raced Miami to Nassau, finishing 2nd to STORMY WEATHER in the very windy 1938 edition in which one boat sank and many retired. Also in 1938, she finished 2nd in the St Petersburg-Havana Race to her smaller S&S cousin the 32 ft lwl, 44 ft loa sloop STARLIGHT, always incredibly well sailed by Texan, Albert B. Fay. SONNY also took part in that year’s Newport-Bermuda Race.

At some point SONNY’s name changed to GLADJA and she found herself on Second World War service - presumably as part of the US Coastguard Auxiliary 'Corsair Fleet'. At Nassau she apparently sank and was raised and repaired after a collision with a submarine.

Post-Word War Two, a couple of long and caring ownerships through to the early 1990s ensured this wonderful yacht deservedly survived into the 'classic yacht revival' era.

From about 1945, renamed ASTREA, ownership transferred to one of the bastions of both New York City’s financial world and the philanthropic funding of America’s Cup defence campaigns, George T. Bowdoin of Oyster Bay’s Seawanhaka Corinthian Yacht Club. Along with George Nichols, J.P. Morgan Jr, Cornelius Vanderbilt and others, Bowdoin had been a ‘Morgan Syndicate’ member supporting the prospective Clinton Crane-designed J-Class 1930 Cup defender WEETAMOE. And he would return to the fray in 1964 as a leading member of the successful S&S 12-Metre CONSTELLATION Cup defence syndicate.

In Bowdoin’s ownership until 1957, ASTREA was a familiar sight on the post-war Long Island Sound to Maine cruising and racing circuit, and this continued, renamed AKKA, from 1957 with Van Dorn “Jack” Smith and family of Port Washington, NY and later Woods Hole who loved her until his death in 1990 aged 95.

In 1993 she was purchased, beautifully original but by this time in need of much work, by a Dutch furniture maker who also collected the S&S Loki class yawl PANGUR BAN, and the 1957 S&S 52ft yawl MAH JONG with a view to restoring them for profit. After this didn’t work out, AKKA lay deteriorating at Rockport, Maine, for many years until rescued in 2001 by the Italian Cantiere Navale dell’Argentario on behalf of German merchant banker and classic yacht enthusiast Wilhelm von Finck, owner of the series of four BORKUMRIFF schooners, and at that time the John G. Alden 50ft sloop WHITEWINGS.

Led by enigmatic American yacht design enthusiast Federico Nardi, the Tuscan yard had from the mid-1990s been building a reputation for the authentic restoration of a growing list of significant American classics, then somehow forsaken in their homeland (it's certainly no longer the case), including the S&S trio of 1938 Nevins-built 12-Metre NYALA, DORADE and STORMY WEATHER.

SONNY was a natural progression. The restoration majored on authenticity and giving her a chance to perform well under the Mediterranean CIM Rule. On her early summer 2002 re-launch SONNY didn’t disappoint, both aesthetically and on the race course, with her then 94-year-old designer joining in for early sails, including a class win in her first regatta for decades at Porto Santo Stefano.

After Wilhelm von Finck's death at 79 in 2003, his family kept SONNY until 2007 when she returned to American ownership and waters with Sparkman & Stephens enthusiast Joe Dockery, who soon also became owner of another of the 50+ feet cousins, SKYLARK. Under his ownership, and since 2017 with her present owners, SONNY has enjoyed the best of attention in maintenance and refit/ restoration, detailed elsewhere here; and of course in use - a mean machine on the east coast classic circuit - which these creatures quite rightly deserve, and give back such pleasure in return.

Over the past fifteen or so years there has become a transatlantic equilibrium of activity in the restoration, sailing and racing of these fabulous products of different times and young genius, with for example, DORADE and SONNY going back west and enjoying further restoration and refit and classic racing among peers, and SKYLARK and others shipping east. One imagines there will never be another time when such practical works of art would be allowed to go to seed, with such opportunities for use and care again so healthily abundant - which makes ownership of a special yacht like SONNY such an enticing prospect.

- Sole throughout is solid oiled teak

CANVASWORK
- Mainsail boom cover with SONNY 1935
- Covers for all hatches